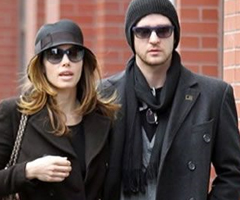 Perhaps this is some sort of band-aid baby? Jessica and Justin have been on the outs for a while now. Somebody should really send J. Biel the memo titled Ways To Scare Your Boyfriend Away.

“Jessica is desperate to settle down and have kids,” said one insider. “And ideally she’d like it to be with Justin. “She’s been on at him for weeks about starting a family. Ideally she’d like to get married, too, but she’s told Justin she’ll happily settle for just a baby.”

Yes — because the way to a man’s 20-something heart is always “let’s have babies.” Oh, Jessica…

Will Kim Take over Angelina Role in New Tomb Raider?

Summer Concerts and Back to school Fashion drive Internet Traffic

Aniston’s legs are best in Hollywood

Prince William’s Brutal Side of the Story Comes After Spending Time with...

Investors are threatening to withdraw their money from the troubled Trump startup...

Murder suspect and his 15-year-old daughter were killed in a shootout with...