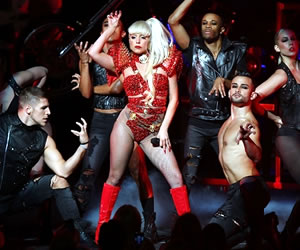 The ‘Bad Romance’ singer has postponed a number of her upcoming concerts because she can barely walk after hurting herself more than a month ago and is suffering from synovitis, which is severe inflammation of the joints.

The 26-year-old star revealed she was forced to cancel a number of her shows on her Facebook page on Tuesday (12.02.13), saying: “I barely know what to say. I’ve been hiding a show injury and chronic pain for some time now, [and] over the past month it has worsened. I’ve been praying it would heal. I hid it from my staff. I didn’t want to disappoint my amazing fans. However, after last night’s performance I could not walk and still can’t.”

The pop star lady gaga was forced to postpone two concerts in Chicago, one in Detroit and one in Hamilton, Ontario. She said: “I hope you can forgive me, as it is nearly impossible for me to forgive myself. I’m devastated & sad. It will hopefully heal as soon as possible. I hate this. I hate this so much. I love you and I’m sorry.” The singer’s beau Taylor Kinney – who she has been dating since 2011 – is hoping to cheer her up on Valentine’s Day (14.02.13) this Thursday by rustling up a gourmet meal for her pet pooch Fozzi to make sure the poodle/ spaniel cross doesn’t feel left out on the most romantic day of the year.

A source previously said: “Taylor’s making both Gaga and Fozzi medium rare lamb best pieces and mashed potatoes with gravy for Valentine’s Day. “He knows that Gaga would never want her precious dog, which is a cross between an American cocker spaniel and a toy poodle, to miss out on all the romance.” – Femalefirst

Lucifer’ Renewed for Sixth and Final Season at Netflix

Kirstie Alley Net Worth: Find out How Much Money Actress Made

Republicans stay silent on Trump’s call to terminate the Constitution

Kate Middleton and Prince William’s friends are in full on spiral right...